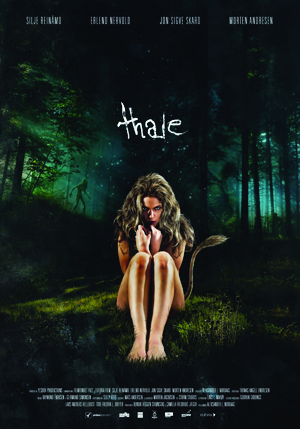 In "Thale," two crime-scene cleaners discover a mythical, tailed female creature in a concealed cellar. She never utters a word, unable to tell her story, but the pieces of the puzzle soon come together: she's been held captive for decades for reasons soon to surface. (Gary Reber)

Special features include the trailer and upfront previews.

The 1080p AVC picture appears to have been shot digitally and exhibits decent quality with clean and pleasing visuals. The color palette is naturally hued with rich and warm tones. Fleshtones are naturally hued as well. During sequences in the basement rooms, a yellowish-green cast permeates, which enhances the sense of danger and suspense in the claustrophobic environs. Exterior scenes within a seemingly isolated forestry lakefront are wonderfully beautiful. Resolution is quite good, especially during close-ups. Overall, while a low-budget production, the visual quality is quite satisfying and engaging. (Gary Reber)

The DTS-HD Master Audio™ 5.1-channel Norwegian soundtrack is quietly nuanced throughout, with a well-recorded hauntingly beautiful music score. The music complements the spoken dialogue and the narration, both effectively presented. From nuanced whispers and deep breathing, to the otherworldly sounds that Thale herself murmurs, spatial integration is excellent. The .1 LFE channel is used effectively to heighten the sense of danger, with deep bass extension. At the same time, sound effects are aggressively positioned in the surrounds. The buildup to the ending scenes is sonically engaging. An English dub version is available in Dolby Digital 2.0 monaural, but the dub execution is poor and not in character as with the Norweigian-voiced version. Overall, this is an effectively haunting sonic experience that delivers the sense of danger and mystery. (Gary Reber)