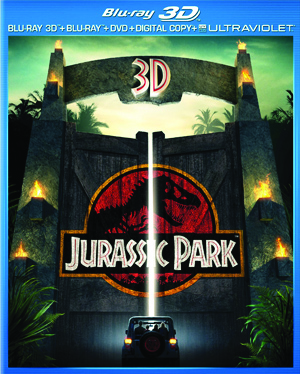 Based on the bestseller by Michael Crichton, Jurassic Park tells the story, both thrilling and terrifying, about genetically cloned dinosaurs that populate an island amusement park—and escape from their pens. The full-motion dinosaurs were created by Dennis Muren, ASC and the live-action ones by the talented Stan Winston, with the special effects for the creatures by Michael Lantieri. (Gary Reber)

Special features include the featurette The World Of Jurassic Park 3D in which Director Steven Spielberg provides an in-depth look at the 3D conversion, an all-new documentary with three of six parts on this disc: Return To Jurassic Park: Dawn Of A New Era (HD 25:25), Return To Jurassic Park: Making Prehistory (HD 20:16), and Return To Jurassic Park: The Next Step In Evolution (HD 15:03); the following archival featurettes: The Making Of Jurassic Park (SD 49:39), the original featurette on The Making Of The Film (SD 04:50), Steven Spielberg Directs Jurassic Park (SD 09:07), and Hurricane In Kauai (SD 02:09); Behind The Scenes, which includes Early Pre-Production Meetings (SD 06:20), Location Scouting (SD 01:59), Phil Tippett Animatics: Raptors In The Kitchen (SD 03:04), Animatics: T-Rex Attack (SD 07:21), ILM And Jurassic Park: Before And After The Visual Effects (SD 06:32), Foley Artists (SD 01:25), five storyboards, the following under "Production Archives": photographs, design, sketches, and conceptual paintings; the theatrical trailer; Jurassic Park: Making The Game (HD 04:43); D-BOX® Motion Code™; and BD-Live. An UltraViolet digital copy is also included.

Jurassic Park was an early example of the use of CGI effects in motion pictures. It paved the way for the success of computer-generated imagery that today is taken for granted. This Blu-ray Disc™ release takes Widescreen Review back 20 years, when we first reviewed Jurassic Park as LaserDisc releases in Issue 11, 23, and 30, all matted at 1.85:1 and THX®-quality assured. In Issue 43, the first anamorphically enhanced 1.85:1 DVD was reviewed. The picture exhibited excellent quality, with sharp and detailed images, and nicely rendered fine background clarity and definition. Colors were well balanced, with accurate fleshtones, rich hues, and deep, pure blacks. Occasional scenes were wanting in clarity, exhibiting minor color smearing. Contrast and shadow delineation was superb, with excellent visual information in the darker scenes. Edge enhancement was apparent but was more noticeable in the earlier scenes, and some minor pixelization was apparent. These distractions mentioned did not make up a majority of the image quality, but their appearance—especially the edge enhancement—could be bothersome. Compared to the previously reviewed LaserDiscs (which still exhibited excellent quality for LaserDiscs), the picture exhibited improvements in sharpness and resolution. The DVD was preferred, visually. There were no noticeable differences between the two versions on DVD, which were distinguished by different soundtrack encodings. The Blu-ray 1.85:1 1080p VC-1 disc reviewed in Issue 162 was absolutely exceptional in picture quality. The image quality was pristine, with exceptional resolution that reveals fine facial features, hair, clothing, and object texture, including all sorts of foliage and CGI dinosaur skin, scales, and reptilian texture composition. The color palette was not only well balanced but nicely saturated with rich and vibrant hues and deep, solid blacks. Fleshtones are naturally healthy in hue, which enhances vibrancy. Shadow delineation was excellent as well. Dimensionality was particularly impressive, with imagery exhibiting excellent depth perception. The new 3D Blu-ray Disc 1.84:1 MVC release was mastered in 4K, though, the source benefits are not particularly apparent. The filmic grain of past releases has been wiped away and along with it nuanced detail. Close-ups are not as refined as previously but the color palette is warmer with richer fleshtones and blacks. The look is more earthier, more naturally hued. For a 3D conversion, the film is impressive. Depth is believable and dimensionality enhances spatial perspective. The 3D treatment provides an engaging visual impact that the past releases have only suggested, This is the reference-quality 3D presentation that will thrill fans of this classic. (Gary Reber)

During the time Widescreen Review first reviewed Jurassic Park, a series of articles were published about the sound wars between Dolby® Laboratory and DTS®. In Issue 30, the LaserDisc's Dolby Digital discrete 5.1 soundtrack was sourced from the same printmaster that was used to code the DTS Digital Surround soundtrack on the previous LaserDisc. The subtle differences were heard during loud passages in which all five main channels were aggressively active. Though not quite as spatially coherent as the DTS version, the soundtrack was equally astonishing in its dimensional acoustic reality and in the delineation of sounds and their localization within the soundfield. Subwoofers that could stand the dynamic pulses of extremely deep subharmonic and powerful bass were required, or you would be forced to turn the level way down below standard reference. The DVD release reviewed in Issue 43 featured the same Dolby Digital 5.1-channel discrete soundtrack as the previously issued Dolby Digital LaserDisc, except for a bit of attenuation in the low-end that could be due to having reconformed the DVD 5.1 audio for mixdown. The DVD DTS audio had some differences compared to the corresponding LaserDisc version, in that the surrounds were slightly lower in level than on the LaserDisc (for which the necessary 3 dB attenuation to each surround channel from the original theatrical levels for home theatre playback was not applied). Additionally, the low end for the DTS on the DVD was considerably attenuated by comparison. As a result, the initial differences reported for the DTS and Dolby Digital LaserDiscs narrowed considerably for the DVDs, but upon close A/B comparative listening the DTS still got the slight edge, for refinements in low-frequency resolution and spatial detail. The soundtracks were equally astonishing in dimensional acoustic reality and in the delineation of sounds and their localization within the soundfield. The Blu-ray Disc lossless DTS-HD Master Audio™ 7.1-channel soundtrack reviewed in Issue 162 was repurposed as a completely new sonic experience that fully energized the experience. The added two back channels enhanced the dimensional depth and spatial acoustic reality. The dynamics were dramatically engaging and significantly added to the exhilarating excitement. The .1 LFE channel was effectively engaged throughout, with pulse-pounding sub-25 Hz bass that will challenge many home theatre systems. The new DTS-HD Master Audio 7.1-channel remix is by sound designer Gary Rydstrom, who has revisited and revised the team's original work. John Williams' orchestral music score is beautifully recorded with a very wide and deep soundstage presence that extends aggressively into the other surround channels. Atmospherics and sound effects are riveting, with superb low-level resolution and dynamics, as well as directionality. Dialogue is remarkably integrated spatially. The overall impression is one of greater spatial intensity, with effective directional strength heard in the surround channels, including the two added channels positioned to the rear. The new remix preserves the riveting holosonic® soundtrack experience of the previous release. (Gary Reber)