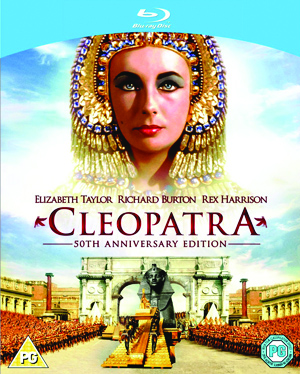 Based upon histories by Plutarch, Suetonius, Appian, other ancient sources, and The Life And Times Of Cleopatra by C.M. Franzero, the bigger-than-life story of Cleopatra comes to Blu-ray Disc in a two-disc set celebrating the film's 50th Anniversary Edition. Taking over five years to make, at a cost of sixty million, and nearly sending its studio, 20th Century Fox, into bankruptcy, the story revolves around the history of Queen Cleopatra (Taylor), who, after being exiled from the palace by her weirdo brother Ptolemy (Richard O'Sullivan), looks for assistance from Marc Antony. The movie won OscarsŪ for Cinematography (color), Art Direction (color), Costume Design (color), and Special Effects. (Laurie Sevano)

Special features include commentary from Chris Mankiewicz, Tom Mankiewicz, Martin Landau, and Jack Brodsky; a documentary Cleopatra: The Film That Changed Hollywood (SD 01:59:07) that features background on the Fox studio, events that led up to the decision to tell the story, Elizabeth Taylor's scandalous personal life and notoriously poor health, the enormous efforts that went into the construction of the elaborate sets, the huge army of extras, and more; the 1963 Movietone News featurette The Fourth Star Of Cleopatra (SD 09:06); Fox Movie News of The East and West Coast Premieres (SD 06:19); a photo Still Gallery with subjects ranging from costume concepts, exhibitors' campaign book, billboard art, British lobby cards, International poster campaigns, and excerpts from the original theatre program; and theatrical trailers.

The previous THXŪ digitally mastered DVD picture reviewed in Issue 49 exhibited nicely saturated colors that were well defined overall, though, some scenes appeared a bit smeared. Edge enhancement was quite prominent at times and remains so in this newly re-mastered 2.21:1 Blu-ray Disc but is subtle and never objectionable. Source element artifacts are barely noticed, as is film grain, which has been scrubbed from the imagery. Color fidelity is excellent, with a diversely rich and warm palette of hues and natural fleshtones. Contrast is excellent with deep, solid blacks and revealing shadow delineation that preserves detail. Resolution is excellent, with fine detail exhibited throughout, especially evident in the elaborate sets and costumes. The imagery is pristine throughout, and the Todd-AO frame nicely captures the scale of the production design. For a picture that is celebrating its 50th anniversary, image quality should surely please fans of this epic Hollywood classic. (Gary Reber)

The soundtrack has been repurposed in 5.1-channel DTS-HD Master Audio and is even more of a remarkable restoration and re-mastering effort compared to the previous DVD's DolbyŪ Digital version. The expansive orchestral music provides for a pleasing, engrossing sense of envelopment and spaciousness, accompanied by deep bass extension in the .1 LFE channel. The sound, while fidelity, is rich and palpable. The audio is presented with notable clarity and sparkle and with minimal inherent distortion. The dialogue is characteristically directional across the screen, and voices exhibit clarity, albeit with tonality that is limited by the dated recording. The dialogue sounds staged, often far too forward sounding. Background hiss was previously quite low, but here is completely unnoticeable. The surrounds dramatically come alive with the orchestral music, and sound effects in general are modestly spread across the screen, except for directionalized effects and a few moments with surround envelopment. The .1 LFE activity is primarily with the music but sometimes associated with the sound effects as well. This is a well-restored, nicely re-purposed soundtrack that is the new sonic reference for this grandiose
production. (Gary Reber)