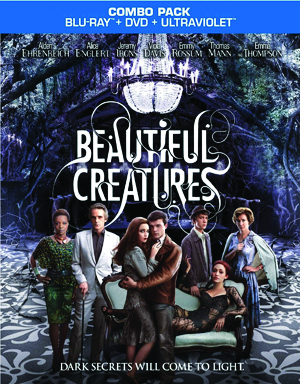 "Beautiful Creatures" is the supernatural journey of two high school students who pursue a tantalizing forbidden romance that leads them into a tangled web of spells and peril from which there may be no escape. Set in the South, two star-crossed lovers: Ethan (Ehrenreich), a young man longing to escape his small town, and Lena (Englert), a mysterious new girl, uncover dark secrets about their respective families, their history, and their town. Based on the novel by Kami Garcia and Margaret Stohl. (Gary Reber)

The 1080p AVC picture is stylized during the darker and murky nighttime segments and flashbacks and dream sequences. Colors appear at times off, but generally the hues are rich and warm. Fleshtones are naturally hued as well. Contrast is generally good, with deep blacks and revealing shadow delineation, though, not always. The overall appearance is filmic and warmly hued. Both soft and sharp focus are inherent throughout, with fine detail evident in close-ups of facial features, hair, clothing, and object texture. In the final analysis, the imagery is pleasantly visual and engaging. (Gary Reber)

The DTS-HD Master Audio™ 5.1-channel soundtrack is engaging, with plenty of energized segments to enhance the flashbacks and dream sequences. During such segments, the surrounds are nicely energized and enveloping directionally. Otherwise, the focus is frontal and dialogue centric. Dialogue sounds natural and is generally well integrated spatially. The .1 LFE bass extension is used effectively to heighten the suspense and darker nature of the story. The music score is supportive during the more dramatic segments. Overall, this is an effective soundtrack experience. (Gary Reber)