As media monoliths bundle their offerings, consumers will once again have to pay for a bunch of shows they donĺt want. 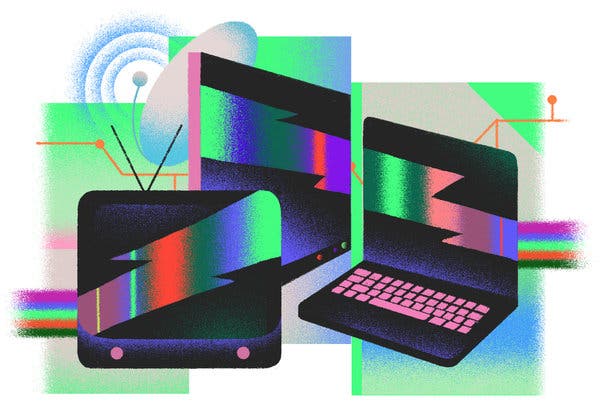 By 2010, nine in 10 American homes were subscribed to a pay-television service. Many had also come to hate it.

Whether delivered by satellite, cable, fiber-optics, radio tower or DVR, “traditional” television had become overrun with klaxonic advertisements and series aimed at the widest possible audiences while meeting the narrowest of advertiser whims. Most television shows were still stuck on annoying schedules and delivered through dreadful channel guides and clunky cable boxes.

And it was expensive. The cost of the average cable package, stuffed with unwanted channels, had grown to $65 per month — and that was before hidden fees and unavoidable equipment charges.

So it was no surprise that audiences eventually flocked to streaming services, such as Netflix and Hulu, which offered a balm for pay-TV’s frustrations. According to Nielsen, the average American now watches nearly a quarter less traditional television than a decade ago, with those under 34 years old having halved their consumption.

But the streaming video era is already starting to resemble the old age of television that viewers were so excited to escape. Many of the problems TV watchers thought they had left behind are just being remixed under different brands and bundles.

The next 12 months will see several video services come to market, including Disney+, AT&T/WarnerMedia’s HBO Max, Comcast/NBCUniversal’s unnamed service, Apple TV+ and Quibi from the Hollywood executive Jeffrey Katzenberg. This increased competition will offer audiences even more high-quality series, the sorts of films that can no longer be found in theaters, interactive storytelling they’ve never seen before, and further improvements in navigation and advertising.

Yet in this new multiplatform world, viewers will find they have to pay for a fistful of streaming subscriptions to watch all of their favorite programs — and in the process, they’ll again end up paying for lots of shows and movies they’ll never care to watch.

AT&T’s WarnerMedia, for example, is bundling its TV channels, like TBS, HBO and TruTV, and film studios, including Warner Bros., DC Films and New Line, into its HBO Max service. Disney+ will have Marvel, Pixar and Lucasfilm, but also National Geographic, “The Simpsons” and Disney’s offerings for children.

And to navigate these many subscriptions, most households will want companies like Amazon or Apple to further bundle these services together into a single app — just as they do with Dish or Xfinity. All of this bundling will eventually mean the return of a high monthly bill.

Behind this bill is the cost of making high-quality programming. Although much has been said about how Netflix and Amazon have disrupted the video business, no media company has figured out how to make premium movies or TV shows significantly more cheaply. In fact, competition has driven production budgets even higher. Ultimately, these costs are paid by viewers (especially if they choose to watch without ads).

But the rise of digital video is bringing back more than just bloated bundles and bills. Many companies are returning to TV’s original business model: selling you anything and everything but the television show in front of you.

For decades, all TV content was “free.” Networks like ABC and CBS distributed their shows free of charge because they weren’t really in the business of selling audiences 30 minutes of entertainment. Instead, they were selling advertisers eight or so minutes of the audience’s attention. While most digital video services do charge their viewers, their real objective is to lock audiences into their ever-expanding ecosystem. Their TV network is the ad.

Amazon, Apple and Roku, for example, use their networks to drive sales of their devices, software, services and other products (to quote Amazon’s chief executive, Jeff Bezos, “When we win a Golden Globe, it helps us sell more shoes”). For YouTube and Facebook, original movies and shows are about increasing the number of ads they serve and the prices they charge for these ads.

AT&T spent some $109 billion buying Time Warner in the hopes that series like “Game of Thrones” and “Friends” would help the company add more wireless subscribers, increase data usage and expand its digital advertising/data arm, Xandr. Today, AT&T gives HBO away to many of its subscribers.

Similarly, the real goal of Disney+ isn’t the creation of a new revenue line for Disney. Instead, it’s about giving the company the ability to know each of its fans individually, including what content and characters they like, and how much, and to sell to them directly. This is why the annual plan is priced at only $70. Monthly subscription fees are trivial if Disney can use the service to sell more $5,000 cruises. The same applies for merchandise, movie tickets and other products.

To this end, many analysts believe the greatest threat to Netflix isn’t imminent competition from storied media giants like Disney and WarnerMedia, but the fact that it’s only in the video business and doesn’t even sell ads.

Giving content away to drive other businesses isn’t unique to movies and TV. Amazon and Google are moving into video gaming primarily to benefit their cloud-computing businesses, for example. Amazon, Apple and Google operate unprofitable music services because the money they lose per subscriber is outweighed by the extra revenue generated elsewhere.

This dynamic reflects the economic reality of the media industry. It has lots of cultural influence, but a relatively modest amount of consumer spending. In 2018, audiences worldwide spent some $300 billion on TV, $138 billion on video gaming, $41 billion on movie tickets and only $19 billion on recorded music. The same year, the five technology giants Apple, Amazon, Microsoft, Google and Facebook had revenue of more than $800 billion combined.

Will any of these companies be willing to greenlight a show about evil artificial intelligence? Or make a show like “Mr. Robot,” a thriller focused on evil mega-corporations and corrupt telecommunication giants? Or bet on a big-budget series that doesn’t offer the prospect of multiplatform synergies? Are they the ideal sponsors of a free press?

Even as the video industry reconstitutes with new players — under old business models and familiar problems — most people agree that TV has never been better. Consumers have more options, better shows and more diversity than ever before.

But at the same time, we’re entering a world in which our culture is programmed by vertically integrated trillion-dollar corporations. This may help us escape high prices and ads in the short term, but eventually the bill will come due.