Box Office Is Down In 2019 despite ‘The Rise Of Skywalker.’ That’s Not What’s Worrying Theaters Most

“Star Wars: The Rise of Skywalker” is finishing 2019 with a bang at the box office. But overall, the domestic box office is expected to be down about 4%.

Hollywood’s staggering revenue disparity at the box office was on full display this weekend as 2019 neared its close.

“Star Wars: The Rise of Skywalker,” the latest film in the four-decade-old science fiction saga, grossed an estimated $176 million in domestic ticket sales Thursday through Sunday, according to Disney, which owns the lucrative franchise. It made space dust out of Universal Pictures’ widely panned adaptation of Andrew Lloyd Webber’s musical “Cats,” which collected $6.5 million, less than half what analysts were predicting.

With the opening results of “Skywalker” and “Cats” in the bank, 2019 is on pace to close with a total of roughly $11.4 billion in the U.S. and Canada, down 4% from last year’s record levels, according to industry estimates.

The results from the two major new releases this weekend reflect a vexing problem for North American cinema owners, who have grown increasingly concerned about the vast delta between the haves and have-nots at the box office — and the lack of a middle ground between the two.

Yes, this was the year of “Avengers: Endgame,” which became the highest-grossing global title ever (not adjusting for inflation), as well as Disney’s “Lion King” remake and “Frozen 2.” But it was also a year of historic flops. “Playmobil: The Movie,” for example, grossed just $656,000 in the U.S. and Canada in its opening weekend. Meanwhile, the Warner Bros. adaptation of “The Goldfinch” collected a mere $5 million, domestically.

Every year has its share of clunkers, but to many, the theatrical market is becoming a business that’s dominated by intellectual-property-powered blockbusters, at the expense of almost everything else, including the mid-level films that used to keep theaters humming year-round.

This year, a huge chunk of total sales went to a handful of titles. The top 10 films at the domestic box office have accounted for 38% of ticket sales so far this year, according to data firm Comscore. That’s up from 33% in 2018 and 24% five years ago.

“There’s a pretty diverse content slate, but sometimes the big movies do suck the life out of the room,” said Chris Johnson, chief executive of Illinois-based Classic Cinemas, which operates 121 screens. Attendance at his theaters for the year is down about 1% from 2018, as of last week, while revenue is essentially flat, he said. 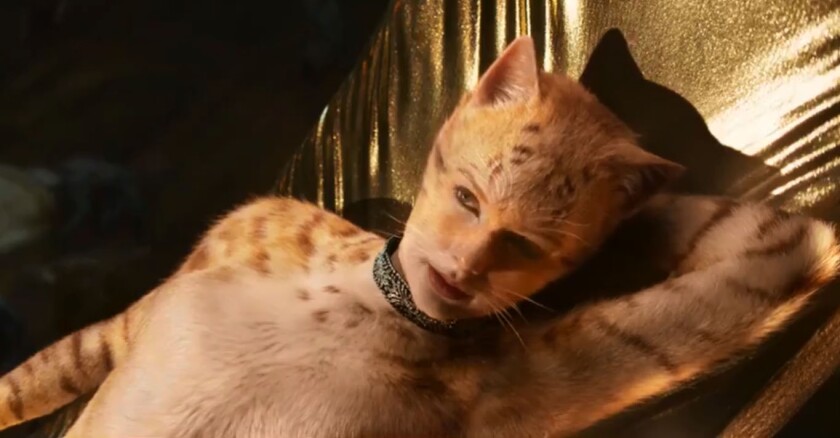 There are several clear reasons for the divide. As the studios become increasingly risk-averse, much of the market for mid-budget comedies, dramas and rom-coms has migrated to streaming services such as Netflix. Studios are loath to risk the embarrassment of a flop, and streamers are more than happy to use such content to draw subscribers.

For example, Noah Baumbach’s critically acclaimed film “Marriage Story,” which is likely to receive multiple Oscar nominations, went to Netflix. Disney recently released an Anna Kendrick Christmas flick and a “Lady and the Tramp” remake on its streaming service Disney+.

When studios do think a movie is suited for the big screen, they spend tens of millions of dollars to market them as large-scale “events,” making it harder for smaller films to get attention.

“The studios are more corporate-driven and guided by marketing and bean counters than ever before, and the ability to invest in originality is all moving toward streaming,” said Rick Cohen, who runs the five-screen Transit Drive-In in Lockport, N.Y. “But they still have $200 million to throw at ‘Dark Phoenix.’ You could have made 10 original movies for that budget.”

“Cats,” in particular, struggled because of harsh reviews, as well as a quick and brutal online response to its marketing materials, including its first trailer that was released in July. Many critics were unnerved by the “digital fur technology” used to turn performers including Taylor Swift and Judi Dench into CGI cat-human hybrids. If a movie is seen as bad on social media before it opens, it’s difficult, if not impossible, to recover.

Nonetheless, Universal is hoping the picture will reach its target audience, including older viewers, during the holidays.

“The story isn’t necessarily over on how ‘Cats’ is going to play domestically,” said Jim Orr, president of domestic distribution at Universal Pictures. “This audience group doesn’t necessarily rush out on opening weekend.”

An unprecedented chunk of the business was driven by a single giant: Walt Disney Co.

Disney’s movies have accounted for 32% of ticket sales in the U.S. and Canada, the highest market share in the modern entertainment business, according to Comscore. Counting movies from 20th Century Fox and its specialty arm Fox Searchlight, which Disney acquired in March, the company’s market share is 37%. 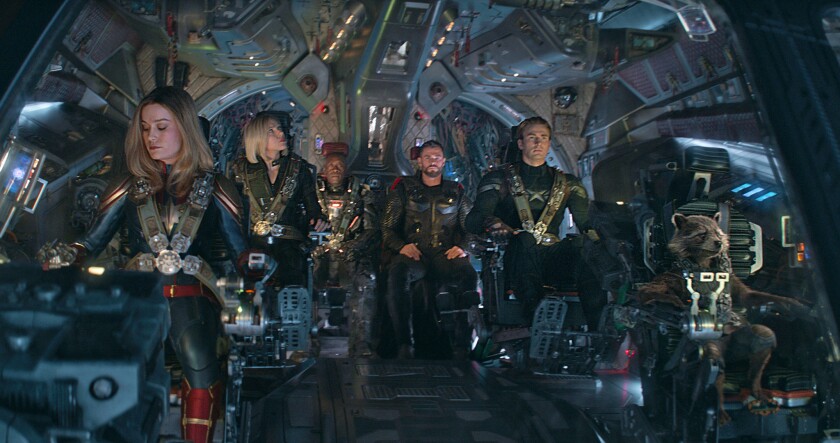 Disney again relied on its popular brands. “Endgame,” the culmination of a 22-film arc from Marvel Studios, grossed nearly $2.8 billion worldwide (unseating “Avatar” as the record-holder, unadjusted for inflation). Seven of the top 10 domestic movies were released by Disney. Two of them, “The Lion King” and “Aladdin,” were remakes of 1990s animated classics. Another pair, “Toy Story 4" and “Frozen 2,” were animated sequels. “Captain Marvel” was, well, a Marvel movie.

“It’s certainly been a banner year,” said Disney theatrical distribution President Cathleen Taff. “Each of our studios have contributed to the results in a major way. That’s the only way you can get to a number like this.”

The latest “Star Wars” film closes out the nine-movie arc of the Skywalker family that began with George Lucas’ “Star Wars” in 1977. Its opening represents a powerful start for the J.J. Abrams-directed movie’s run, though it debuted lower than the previous chapters in the trilogy that started with “The Force Awakens” in 2015.

The “Rise of Skywalker” opening was down 20% from the debut of “Star Wars: The Last Jedi,” the 2017 installment written and directed by Rian Johnson, which opened with $220 million in the U.S. and Canada and eventually grossed $1.3 billion worldwide. Critics were mixed on “The Rise of Skywalker,” which attempts to not only tie together the various threads of the franchise, but do so in a way that satisfies “Star Wars” devotees. Though “The Last Jedi” was a hit with critics, its creative choices divided fans.

“The Rise of Skywalker” is the fifth “Star Wars” movie Lucasflim, run by Kathleen Kennedy, has produced since selling to Disney for $4 billion in 2012.

In all, Disney films have collected a record $3.5 billion domestically this year, which is more than double its nearest rival, Warner Bros.

AT&T Inc.-owned Warner Bros. had some big hits, including “Joker, “It Chapter Two” and “Shazam.” But the Burbank studio also released multiple duds, including the Clint Eastwood-directed movie “Richard Jewell,” about the security guard wrongly suspected in the 1996 Atlanta Olympics bombing. The movie, which was sharply criticized online for its inaccurate and stereotypical portrayal of a female journalist, opened with less than $5 million.

The studios are more corporate-driven and guided by marketing and bean counters than ever before, and the ability to invest in originality is all moving toward streaming.

A handful of original films were breakout hits, raising hopes that fresh ideas can still thrive.

“People are continuing to show up for two categories,” said former Imax Entertainment CEO Greg Foster. “Big blockbuster titles with massive scope that you can only get in a movie theater, and also the thought-provoking films made by filmmakers that care deeply about the theatrical experience.”

Some movies bucked conventional wisdom. Sony gambled by making Quentin Tarantino’s “Once Upon a Time... in Hollywood” a major summer release. Universal Pictures’ “Good Boys,” a raunchy comedy starring adolescents, delivered a strong performance despite predictions that the R-rated comedies are dead.

“We continue to do original titles very, very well,” said Universal Pictures’ Orr. “We’re bringing a wide variety of people from many walks of life.”

Another original film, “Knives Out,” a star-studded murder mystery from “Star Wars: The Last Jedi” director Rian Johnson, has collected an impressive $89.6 million so far. That has been a boost to Lionsgate, which has pivoted to mid-budget commercial fare as bigger studios focus on spectacles. Its latest release, “Bombshell,” starring Charlize Theron, Nicole Kidman and Margot Robbie as the Fox News women who battled Roger Ailes, opened with a modest $5.1 million this weekend.

“When you look at the top 50 movies of the year, there’s an argument that the audience has an appetite for original stories well-told,” said Joe Drake, chairman of Lionsgate’s motion picture group. “‘Knives Out’ is a perfect example.”

The success of the middle market is essential for cinema owners like Brian Schultz, founder and CEO of Studio Movie Grill. His chain includes a recently opened location in Glendale, which caters to cinephiles and draws patrons with its dine-in theater offerings.

“The mid-market movie is really critical to the exhibition business being healthy,” said Schultz, whose company operates 34 theaters with about 350 screens. “We’re going to be working with diligence so that the mid-level films get the screens they need and the promotion they need for them to be successful.” 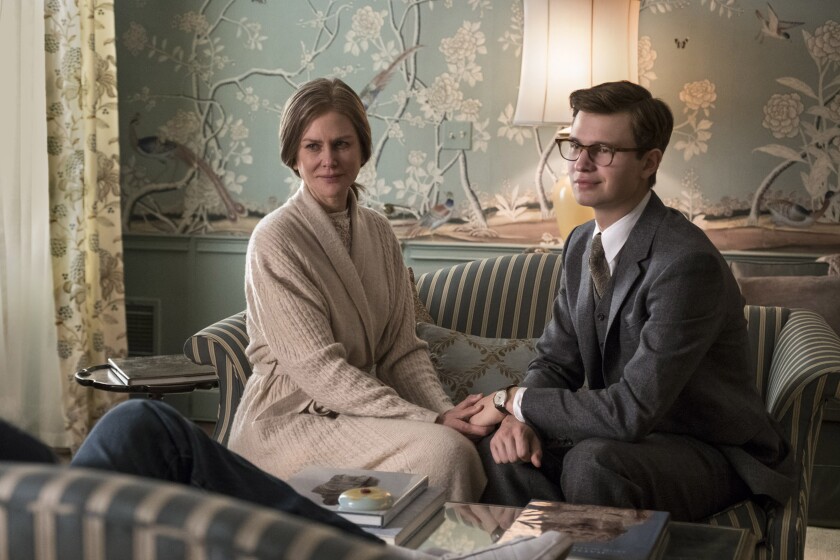 “The Goldfinch” was one of 2019’s major box office flops.

The volatile box office outlook has put some pressure on the major theater chains’ stock prices. Shares of Leawood, Kan.-based AMC, the biggest exhibitor, have declined 37% so far this year to less than $8. Plano, Texas-based Cinemark Holdings is down 3% since the beginning of 2019, trading at about $35.

And next year could prove more challenging for exhibitors. The studio lineup for 2020 features fewer major attractions than 2019. Paramount’s “Top Gun: Maverick,” Marvel’s “Black Widow” and Warner Bros.'s “Wonder Woman 1984" should all perform well, but none is expected to reach the heights of “Endgame” and “Skywalker.”

Many expect that the box office will be down more sharply in 2020, given the lack of obvious blockbusters, even from Disney. Additionally, media companies are bringing even more streaming services to market, including HBO Max and Peacock, which will be vying for viewers’ leisure time.

On the other hand, Disney’s hold on the box office market share should loosen as it goes a year without a “Star Wars” or “Avengers” movie. That could give other studios more of a chance to make a splash of their own.