Are We Really Streaming "HD" Music?

In my last blog post, I lamented the confusion that Amazon has wrought on the world of HD-Audio with their reclassification of Redbook audio as "HD". It wasn't considered "high-definition" or "high-resolution" back in 1982 when CDs were introduced by Sony and Phillips as the first digital consumer audio format and it wasn't considered HD by NARAS, the CEA/CTA, the DEG, and the record labels when they finally agreed on a definition and issued a press release with their definition several years ago (HD is basically anything "better than CD spec"), and it wasn't HD-Audio according to the Japan Audio Society when they began promoting the HD-Audio logo for their new generation of "hi-res audio" hardware. But Amazon upended ALL of the previous efforts to standardize what "hi-res audio" and "hi-res music" actually are. 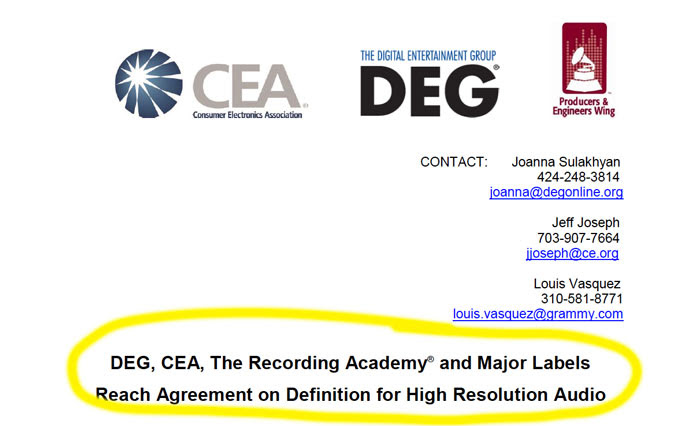 Here's where we were before the 800-pound gorilla entered the fray:

LOS ANGELES (June 12, 2014) – DEG: The Digital Entertainment Group, in cooperation with the Consumer Electronics Association (CEA)® and The Recording Academy®, announced today the results of their efforts to create a formal definition for High Resolution Audio, in partnership with Sony Music Entertainment, Universal Music Group and Warner Music Group.

High Resolution Audio is defined as “lossless audio that is capable of reproducing the full range of sound from recordings that have been mastered from better than CD quality music sources.”

I've written extensively on the problems with this definition and the "Master Quality Recording Sources" that are used to further identify the provenance of original masters. In short, it makes no sense to call something high-resolution audio if the analog source that it came from was an Edison cylinder from the early part of the 20th Century even if the digitization was done at 192 kHz/24-bits. Ignoring the limitations of the original recording formats and simply focusing on the ultimate digital container means virtually ALL so-called "high-resolution" music is NOT high resolution. Anything recorded prior to 2000 is forever locked in as a standard-resolution recording.

An Analysis of Neil Young's "Heart of Gold"

Some months ago, well before the announcement by Amazon that CDs are now "HD" and hi-res music is now "Ultra HD", I signed on to Neil Young's web streaming service. He launched his service late last year in partnership with Warner Brothers and claims that his service provides "high-resolution streaming" (NOTE: This is done without any need for MQA!!). For a monthly fee, users can enjoy high quality recordings from Neil's vast archive, which goes back many years. You can visit: https://neilyoungarchives.com and check it out yourselves. I did.

The site is very "analog" in its style and design. Honestly, I like the vibe and the thoroughness in providing information about the recordings AND the quality of the streams. In the upper right had corner of the page is an analog meter and a toggle switch.

The meter showing the resolution of the track and streaming bandwidth.

I thought it would be interesting to compare 4 different "qualities" of the tune Heart of Gold. This track was originally from an analog recording from the 1972 release Harvest album. I've had the pleasure to meet and chat with Neil Young a number of times and have a framed Gold DVD for my production work on Rust Never Sleeps. I'm a fan.

I have 4 different resolutions of Heart of Gold. From HD Tracks, I have the 96 and 192 kHz /24-bit version. I have a ripped CD version at 44.1 kHz/16-bits and I captured the Amazon Ultra HD stream recently using LeawoMusicRecorder on my Mac. I could have set up my Benchmark DAC2 HGC and captured the output on my HD ProTools DAW but as you'll see below, it wouldn't have made any difference.

The track as displayed on Amazon. It is listed as an "Ultra HD" track.

The provenance of this track follows the production path I discussed a few posts ago. I've added the graphic once again for those that may have missed it (there were a number of individuals on Steve Hoffman's Forum that disagreed with my corrected graphic. I can assure you it's correct...I made a lot of albums this way!). However, instead of cutting a lacquer master, the mastered tape is digitized to 192 khZ/24-bit PCM audio. 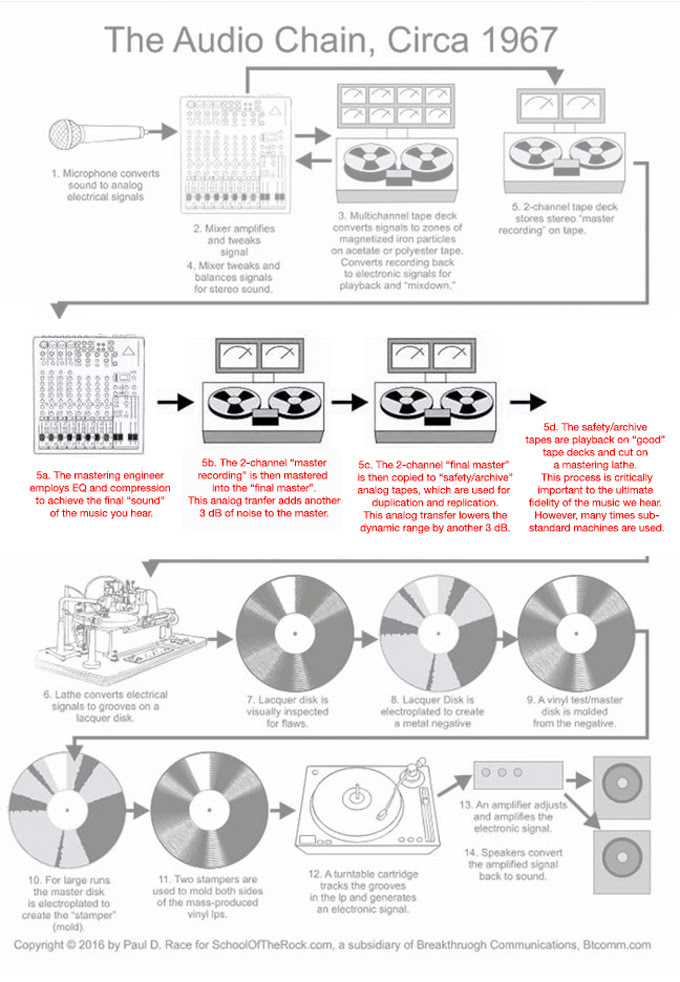 The production path of "Heart of Gold" - at least up to the 2-channel master.

Advocates for "high-resolution audio" or "high-resolution music", which is technically the correct descriptor of music presented at better than CD quality, claim that the higher sampling rate and longer word lengths enhance the fidelity of the original standard-resolution master somehow. In reality, the only process that can change — not necessarily improve — the fidelity of the original master (or many times the safety copy) is for the track to be remastered. And record labels do not want to pay to have most "HD" release remastered. Most "hi-res" audio downloads or streams come from the original safety copy.

I analyzed the amplitude and frequency response of Heart of Gold using Adobe Audition. Below are the plots showing the four different resolutions: 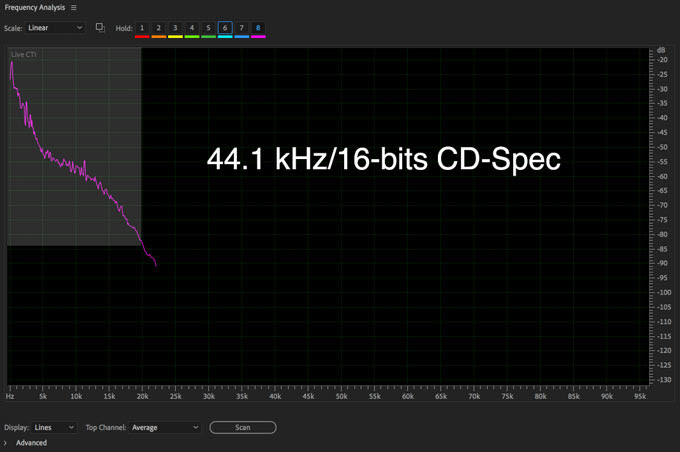 This is the frequency and amplitude plot of a standard-resolution CD rip at 44.1 kHz/16-bits. The shaded area in the upper left hand corner is the portion of the graph that we can reproduce with our audio systems AND which a very healthy young person can "hear". Even the best recording studios do not have noise floors lower than around 80-90 dB AND your listening environment is probably much worse. The upper frequency reproduced from a CD is at the very upper limit of human hearing. The CD resolution — or standard-res — of this track is all we will ever need. 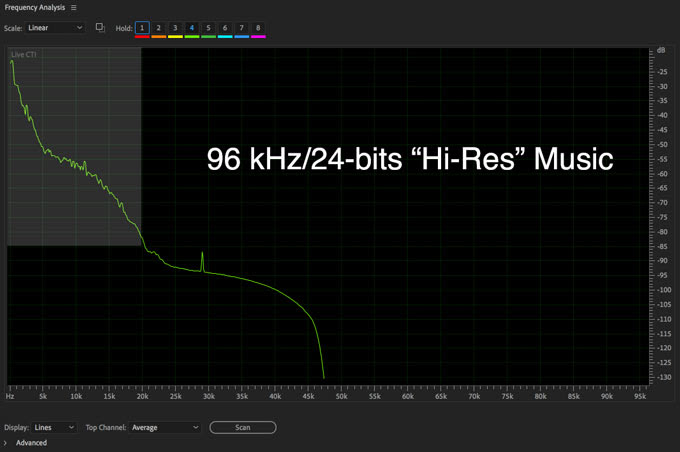 The same original analog track digitized at 96/24. Notice there is no improvement in the frequency response in the audio band. The little spike at 30 kHz might be the bias frequency of the tape machine or some other imperfection. We don't hear it and our systems cannot reproduce it. 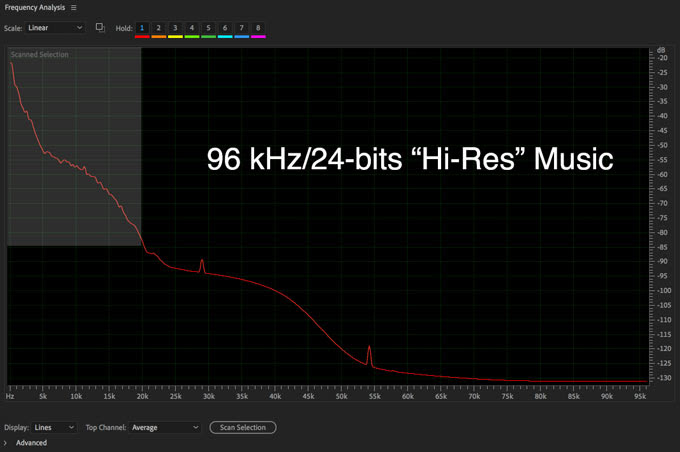 The 192 kHz version provides absolutely not additional information over the 96 kHz/24-bit version and sound identical to the CD version. Remember everything we can reproduce AND hear is in the shaded area. 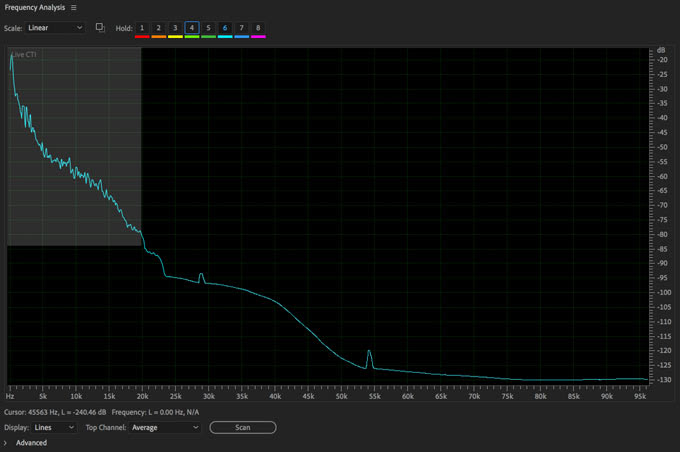 The new Amazon "Ultra HD" stream has the same fidelity as the original Redbook CD. And I'm very pleased that streaming at CD specs can finally be accomplished — and thankfully without the MQA nonsensical processing (notice that the origami folding of ultrasonic frequencies would put no audio material in the file!).

We should be thrilled to have uncompressed CD quality streams available. But we shouldn't be paying more for it. The folks at Amazon — and Qobuz and others — are trying to repackage standard-resolution audio in bigger bit buckets and sell it to us a premium prices. It's just the same old fidelity available in a new distribution paradigm. Stop pushing ridiculous numbers on us (768 kHz/32-bits!!) and focus on producing better sounding masters!

Let's push for lossless CD quality streams and better sounding masters. Forget about MQA and any company — hardware or software — that tells you to get behind "hi-res" audio or music.

I've been preparing for the second round of the HD-Audio Challenge and will be posting it soon. Using real HD-Audio masters, I'll be asking listeners using their own systems to tell me which master is the original HD version and which has been downconverted to CD specs. This should put to bed the claims of hi-res advocates that the format has magically improved the fidelity of an analog original master.

A New Book on High-Res Streaming

The more I begin to research the areas of high-resolution streaming, downloads, and personal audio, the more confused I get. The companies, reviewers, and websites pitching this stuff present a lot of conflicting and bad information in service to their bottom line. As much as I do not want to spend the next year of my life researching, writing, and illustrating another book, I've made the decision — a book on this topic is sorely needed. I will be raising the initial funds using Kickstarter once again. Stay tuned.

If you want to learn more about this new book or get on the mailing list, please visit: http://www.sdpaguide.com/. And if you have any specific areas that you would like me to address in the new book, please let me know. You can always write me at mwaldrep@aixmediagroup.com or enter your question in the online form on the website. 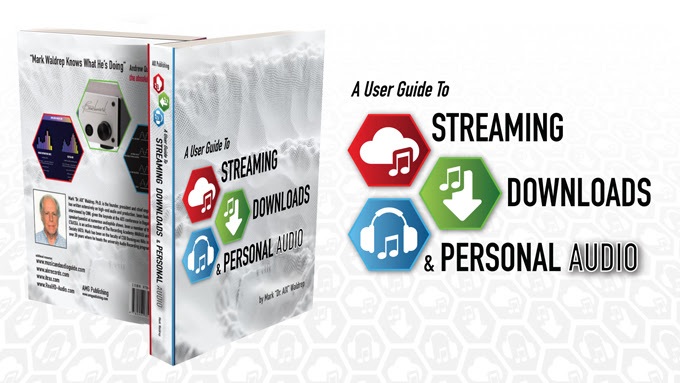 The new book "A User Guide to Streaming, Downloads & Personal Audio is coming!