Will Streaming Kill The Art Of Cinema Or Grant It New Life?

A co-chief film critic of The New York Times debates himself on the subject. 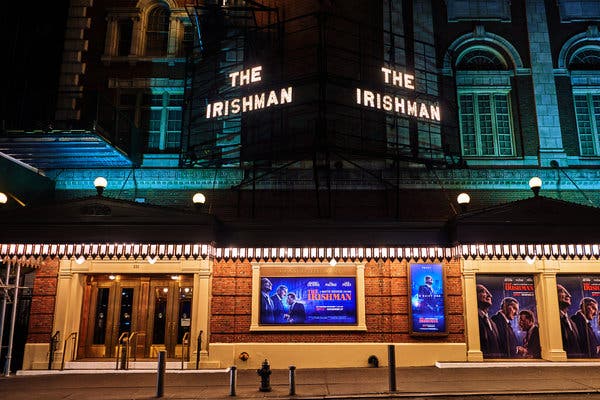 The exterior of the Belasco Theater in Manhattan, where  “The Irishman” is showing before heading to Netflix.Credit...An Rong Xu for The New York Times

Our co-chief film critic is of two minds on the subject, and is not shy about speaking both of them.

A.O. Scott, Professional Couch Potato Recently, Martin Scorsese made some waves on the internet when he said, more than once, that Marvel movies were “not cinema.” Those anchors of the Disney entertainment empire are widely seen in theaters around the world, fulfilling at least one basic criterion of what “cinema” might be. Scorsese’s latest film, “The Irishman,” which for my money is about as good as cinema gets, is playing in theaters for just three weeks before taking up permanent residence on the Netflix streaming platform.

It will join Alfonso Cuarón’s “Roma,” a multiple Oscar winner earlier this year, and Noah Baumbach’s “Marriage Story,” as well as “Atlantics,” by the French-Senegalese director Mati Diop, an award-winner at the notoriously Netflix-hostile Cannes Film Festival in May. That’s a small sample, limited to just one streaming company. There’s a lot of cinema out there — maybe more than ever before — even if most viewers will have to stay home to experience it.

A.O. Scott, Professional Cinephile Which is no small matter, and nothing new. People have been watching movies at home since the early days of television. I doubt anyone is enough of a purist to refuse to watch them that way, but you don’t have to be a film snob to prefer the big screen, the dark room full of strangers, the community and communion of what is now half-dismissively called “theatrical.” The pictures look better that way.

A.O. Scott, Couch Potato Sometimes. But you might have to endure under-illuminated projection, muddy sound and the threat of bedbugs. Not to mention the distraction of texting, talking, screaming babies, loud popcorn-chompers or — in the new, reserved-seating, cine-gastro-plexes — the aroma of someone else’s fish tacos. A decent flat screen can deliver a perfectly adequate, even superior, aesthetic experience — one you can control.

A.O. Scott, Cinephile So you have to provide your own distractions. You can pause the picture, check your email, wander into the kitchen for a snack, fast-forward through the slow parts, switch over to the news. You’re free to desecrate a work of art on your own terms, in the privacy of your own home.

A.O. Scott, Couch Potato But at least you have access to those works. You can feast on masterpieces of world cinema with your Criterion Channel subscription, on blockbusters and family movies with Disney Plus. Your television will be a universal cinematheque, a big-box video store with no late fees.

A.O. Scott, Cinephile Only subscription fees, which can add up in a hurry if you want that — highly theoretical — full menu of cinematic delicacies. The subscription model undermines that fantasy of universality. Imagine a video store that allowed you to rent only Warner Brothers movies. Imagine having to enroll in a corporate loyalty program, pledging allegiance to Disney or Sony or Netflix, and being forced to limit your choices accordingly.

The emerging streaming regime both restricts and expands access. Matt Zoller Seitz recently published a troubling article in Vulture about how Disney, newly in possession of the 20th Century Fox catalog, won’t allow Fox titles to be screened in public. But why, as a simple economic matter, should companies in the streaming business undercut the value of their assets by letting nonsubscribers see them?

If that practice became the norm, if Netflix, Amazon and the studio-owned streamers kept their movies locked up on their platforms, what would happen to college film societies, museum film departments and repertory houses? This may seem like a minor issue, but revivals and retrospectives are part of how tastes are formed and history is made and revised.

A.O. Scott, Cinephile What encourages them? Streaming is built on the power of the algorithm, which inhibits risk and serendipity and creates an illusion of ease and comprehensiveness.

A.O. Scott, Couch Potato Why call it an illusion? It’s surely the case that more movies are now available to more people in more places than before, at any time of day or night. You don’t need to live near a campus or a museum or even an art house. You can queue up the complete works of your favorite auteur at six in the morning if you want to.

A.O. Scott, Cinephile Will you, though? Abundance can be its own kind of scarcity. Without a sense of occasion, without the idea that a given experience is special, even rare, all experiences become equivalent, and our attention follows the path of least resistance.

Going to the movies is a lark, and an adventure and a commitment. Watching television has historically been a more passive, less adventurous undertaking. It’s about familiarity, comfort, the safety of your own couch or smartphone. Folding a sometimes difficult, often strange, occasionally sublime art form into that universe is a way of burying it.