Movie Crowds Stay Away. Theaters Hope It’s Not For Good.

Cinemas, already contending with streaming services, are now facing the prospect of no audiences and no new films because of the coronavirus pandemic. 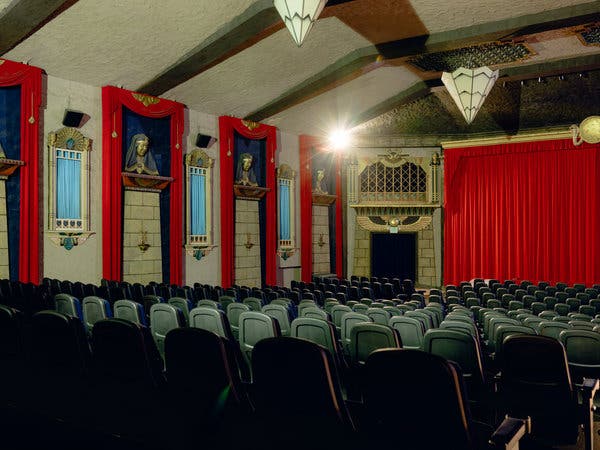 Many movie theaters in the United States have stayed open during the coronavirus pandemic, but analysts say ticket sales have fallen 30 percent or more as many people stay home.Credit...Rozette Rago for The New York Times

For most of last week, movie theater executives clung grimly on.

At issue, among other things, was CinemaCon, an annual Las Vegas event intended to bolster the most fragile part of the film business: leaving the house, buying a ticket and sitting in the dark with strangers to watch stories unfold on big screens. The National Association of Theater Owners was under pressure to call off the convention because of the coronavirus pandemic, but worries abounded about potential consumer fallout.

What message would canceling the confab send to potential ticket buyers, including those increasingly likely to skip cinemas — even in the best of times — and watch films on streaming services like Netflix, Amazon Prime Video and Disney Plus? American cinemas, after all, were staying open in the face of the pandemic.

Reality eventually made the association pull the plug on CinemaCon, another example of how seemingly every part of American life has been disrupted because of the coronavirus. For movie theaters, however, the pandemic could be a point of no return.

The National Association of Theater Owners has insisted that streaming services are not a threat. “Through every challenge, through every new technology innovation over the last twenty years, theatrical admissions have been stable and box office has consistently grown,” John Fithian, the association’s chief executive, said in a January news release titled “theater owners celebrate a robust 2019 box office.” Ticket sales in North America totaled $11.4 billion, down 4 percent from a record-setting 2018.

Many analysts, however, see a very different picture. Looking at the last 20 years of attendance figures, the number of tickets sold in North America peaked in 2002, when cinemas sold about 1.6 billion. In 2019, attendance totaled roughly 1.2 billion, a 25 percent drop — even as the population of the United States increased roughly 15 percent. Cinemas have kept ticket revenue high by raising prices, but studio executives say there is limited room for continued escalation. Offerings in theaters may also grow more constrained. Even before the pandemic, major studios were starting to route smaller dramas and comedies toward streaming services instead of theaters.

And now comes the coronavirus, which has prompted people to bivouac in their homes, theaters to put in place social-distancing restrictions and studios to postpone most theatrical releases through the end of April. Rich Greenfield, a founder of the LightShed Partners media research firm, predicted that the disruption would speed the ascendance of streaming.

“The behavior was already shifting, but this hits the accelerator pedal,” Mr. Greenfield said. “I think most of the global exhibition business will be in bankruptcy by the end of the year.”

He added, “Now studios are going to think more and more about why they are relying on third parties to distribute their content.” 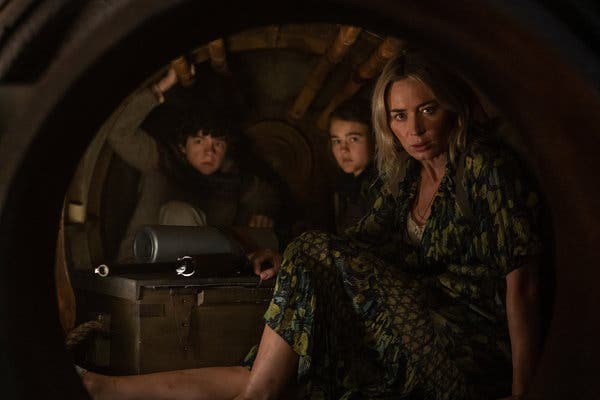 “A Quiet Place Part II,” featuring Emily Blunt, is among the movies whose releases have been postponed.Credit...Jonny Cournoyer/Paramount Pictures

As studios have postponed theatrical releases like “Mulan” and “No Time to Die,” they have been careful to express loyalty for theaters. “We believe in and support the theatrical experience,” Paramount Pictures said in a statement on Thursday, when it announced that “A Quiet Place Part II” would no longer arrive in theaters on March 20. But a question looms: Could the pandemic hasten long-brewing changes in the way that new movies roll out?

Most movies still arrive the same way they have for decades. They appear first in theaters, for an exclusive run of about 90 days, and then in homes. Theater chains, including AMC, Regal and Cinemark, have fought off efforts to shorten the exclusivity period. They worry that people will be reluctant to buy tickets if they can see the same film on their living room television set or iPad screen just a few weeks (or days) later.

Many entertainment companies, however, are eager to shorten that exclusive window and make some films available on their streaming platforms, in part to reduce marketing costs.

The biggest studios declined to comment. A senior Disney executive, speaking on the condition of anonymity because he was not authorized to speak to a reporter, said that rerouting “Mulan” to the company’s Disney Plus streaming service was not currently under discussion, in part because of piracy concerns. (Disney Plus is not yet available outside the United States.) Even so, Disney is clearly mindful of the power of its video platform. The company brought “Frozen II” to Disney Plus on Sunday — three months earlier than planned. (The musical was released in theaters on Nov. 22.) Disney described that move as “surprising families with some fun and joy during this challenging period.” 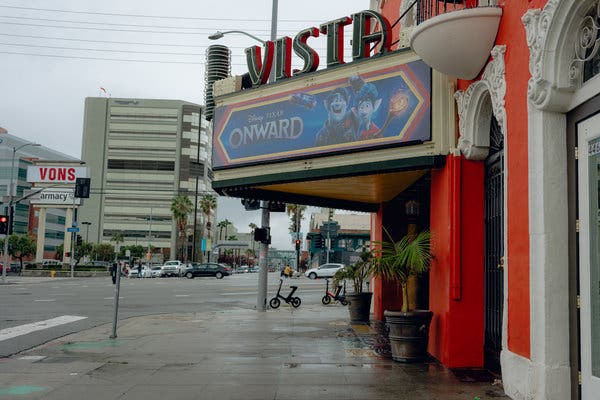 “Onward,” released March 6, was the top movie in ticket sales over this weekend. But its total fell 73 percent from the previous weekend.Credit...Rozette Rago for The New York Times

With the masses staying at home, ticket sales dropped precipitously over the weekend, even though two high-profile new films, “Bloodshot” and “The Hunt,” arrived in wide release. Each was supported by a marketing campaign costing tens of millions of dollars, and the money had already been spent by early last week, when the pandemic intensified in the United States and studios started to postpone releases planned for later in the month.

“Bloodshot,” starring Vin Diesel as a superhero, collected roughly $9.3 million, according to Comscore. It cost Sony and several financing partners about $45 million to make. “The Hunt” (Universal Pictures), a satirical horror film about elites killing “deplorables,” cost about $15 million to make and took in $5.3 million.

The No. 1 movie was a holdover, “Onward” (Disney-Pixar), which sold about $10.5 million in tickets in its second weekend — a 73 percent decline from its first three days in theaters. Pixar movies typically decline 30 percent to 45 percent from their first to second weekends, demonstrating the impact of coronavirus fears on moviegoing.

Cinemas will soon run out of high-profile new films to show. Studios like Disney, Universal, Sony and Paramount all postponed films scheduled for release this spring, including “The New Mutants,” “Peter Rabbit 2: The Runaway” and “F9,” the ninth chapter in the “Fast and Furious” series. 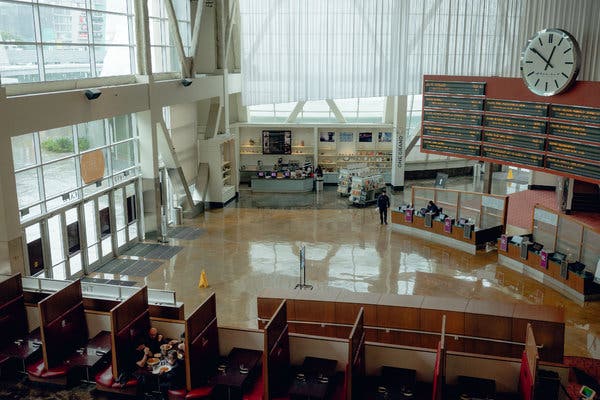 Some theater chains are reducing the number of people permitted in their auditoriums to allow for empty seats between movie viewers.Credit...Rozette Rago for The New York Times

“The core audience for our film is older moviegoers, and we want them to be able to see it at a time that’s safe,” said Tom Dolby, who directed “The Artist’s Wife,” a drama that was set for limited release starting on April 3 but was postponed.

Theater chains in the United States are doing anything they can to avoid shutting down. AMC Entertainment, the No. 1 multiplex operator in North America, said on Friday that it would reduce the number of theatergoers allowed in all of its auditoriums by 50 percent so that people could leave at least one empty seat between each other. No auditorium would offer a capacity beyond 250, the company said — a threshold that some states, including California, have said group activities should not exceed until the pandemic eases.

AMC said its restrictions would last until April 30. The company seemed to indicate that it was making the move to avoid possible government intervention; some chains in Europe have been forced to close entirely. AMC said it was “reducing the availability of tickets to comply with any current or future federal, state or local governmental order.” AMC’s stock price has fallen 59 percent over the last month; it closed on Friday at $3.22. 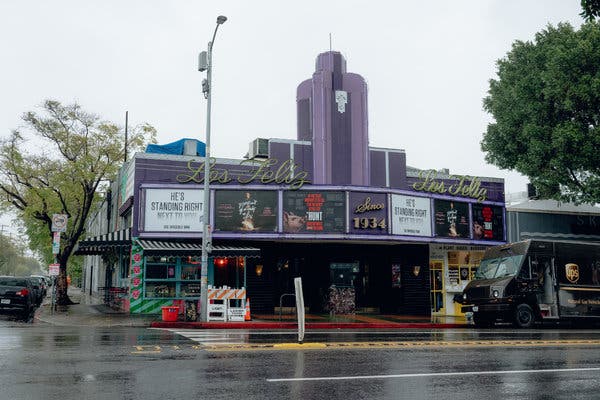 Cinemas will soon run out of high-profile new films to show.Credit...Rozette Rago for The New York Times

The Cineworld Group, which owns Regal Entertainment, followed AMC and reduced its auditorium capacity by half. In a statement, Regal said it was “complying, where applicable, with state mandates on social gathering limits. We welcome moviegoers into our theaters!” Mooky Greidinger, Cineworld’s chief executive, told analysts on Thursday during a year-end earnings discussion that the company had so far experienced a “minimal” impact from the pandemic but that Cineworld would be unable to pay its debts if people started to stay home in droves.

Cinemark, the No. 3 chain in the United States behind Regal, referred questions to the National Association of Theater Owners, which declined to comment. Alamo Drafthouse, a Texas-based chain with about 40 locations, required social distancing at some theaters while closing others outright.

With most finished live-action films pulled off the release calendar — “Black Widow” from Marvel-Disney remains scheduled for May 1 — film companies have started to halt or slow their assembly lines. Disney, for instance, temporarily stopped production on a new version of “The Little Mermaid,” which was supposed to begin shooting in London; “The Last Duel,” a period epic starring Ben Affleck and Matt Damon; and “Shang-Chi and the Legend of the Ten Rings,” a Marvel superhero film.

As a result, even films scheduled for release at Christmas, like “The Last Duel,” will most likely be delayed. (“The Little Mermaid” and “Shang-Chi” were never expected before 2021.)

Reached by phone in Budapest on Friday, moments after the announcement that the World War II drama “The Nightingale” was being shut down because of fears of the coronavirus and the European travel ban put into place by President Trump, its producer, Elizabeth Cantillon, said she was heartbroken.

“If you can’t produce content, then I don’t know what to say,” she said. “Movie theaters, television networks, Netflix — they all need content all the time. If we can’t produce it because we can’t be next to each other, what happens? It’s just going to be a lot of YouTube videos of people in their bedrooms.”